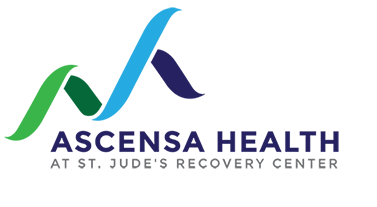 Our website will be changing from Sjrcatl.org to Ascensahealth.org starting in February.

How do I know if I or someone I love has a problem with addiction?

Addiction is a disease, involving the progressive habitual use of drugs and/or alcohol in spite of physical, social, occupational, and/or financial consequences. Common signs include an increased tolerance for and consumption of substances; physical, psychological, and behavioral withdrawal symptoms; and loss of control.

How can I get help?

St. Jude’s Recovery Center, Inc. provides residential and outpatient addiction treatment and support services to adults and their families. Contact St. Jude’s Admissions/Intake Department to discuss eligibility requirements and availability of treatment options. Staff members can assist you or refer you to the appropriate service provider.

St. Jude’s Recovery Center is licensed by the Healthcare Facility Regulation Division of the Department of Community Health and accredited by the Commission on Accreditation and Rehabilitation Facilities (CARF).

What are St. Jude's Recovery Center's hours of operation?

While St. Jude’s residential programs operate seven days a week, 24 hours a day, administrative office hours are Monday through Friday, from 8:00 am to 4:30 pm. The Admissions / Intake Department is open from 8:00 am to 4:00 pm.

How can I help St. Jude's Recovery Center, Inc. in its mission?

St. Jude’s depends on the generosity of people in our community to help provide quality care to those in need. Financial and in-kind donations are welcomed. Gifts of any size are appreciated and every gift makes a difference. There are many ways to Donate.

What is drug and alcohol addiction?

Addiction is a disease, involving the progressive habitual use of drugs and/or alcohol in spite of physical, social, occupational, and/or financial consequences.

What are the signs of addiction?

Every day, millions of people in the United States suffer from drug and alcohol addiction. In fact, an estimated 22 million Americans are classified with substance dependence or abuse. In Georgia alone, the number of people needing substance abuse treatment is estimated to be nearly 730,000 adults and 40,000 adolescents. Furthermore, approximately 222,000 adults and 10,500 adolescents in metropolitan Atlanta are in need of addiction treatment. Common signs of addiction include:

How can addiction affect a person's health?

Drug and alcohol abuse can destroy a person’s health. In fact, substance abuse causes more deaths, illnesses, and disabilities than any other preventable health condition today. Physical and psychological complications resulting from addiction are numerous and include the following:

Are addiction and mental illness related?

How can addiction affect the family?

Addicts do not suffer alone. For every addict, there are family members and friends who must cope with the emotional, physical, and spiritual hardships caused by his/her addiction. Approximately one out of every four Americans experience family problems related to alcohol abuse.

The painful effects substance abuse can have on family members and friends are commonly referred to as Co-Dependency. Common signs and symptoms of Co-Dependency include anxiety, increased sense of responsibility, guilt, anger, insecurity, low self-esteem, over-commitment, stress, and feelings of being used and unappreciated.

The saddest victims of substance abuse are often the children. Current research indicates that 8.3 million children in the United States, approximately 11 percent, live with at least one parent who is in need of treatment for alcohol or drug dependence.

The affects of parental substance abuse are numerous and include emotional distress, isolation, depression, low self-esteem, truancy, delayed psychosocial development, and poor grades. Children living with an addicted parent are also at risk of developing addictions of their own. In fact, children of alcohol-abusing parents are four times more likely than other children of becoming alcoholics themselves, and children of drug-abusing parents are the highest risk group for developing drug addictions.

How does addiction affect the workplace?

Substance abuse is a major issue for American business and labor. Substance-abusing employees are:

How is addiction related to the incidence of crime?

Drug and alcohol addiction greatly increases the incidence of crime. A recent study found that at least half of adults arrested for major crimes, including homicide, theft, and assault, tested positive for drugs at the time of their arrest. The report also found that among those convicted of violent crimes, approximately 50% of state prison inmates and 40% of federal prisoners had been drinking or taking drugs at the time of their offense.

Can treatment help drug and alcohol abusers recover from addiction?

The good news for persons struggling with drug and alcohol addiction is that treatment works. It is reported that substance abuse treatment cuts drug use in half and reduces criminal activity up to 80%. Moreover, treatment of addiction has a much higher success rate than treatment for other types of chronic illness, such as diabetes, emphysema, or high blood pressure.

The benefits of treatment include:

If you have questions regarding addiction call St. Jude’s Recovery Center and ask to speak with Rusty (404) 874-2224.